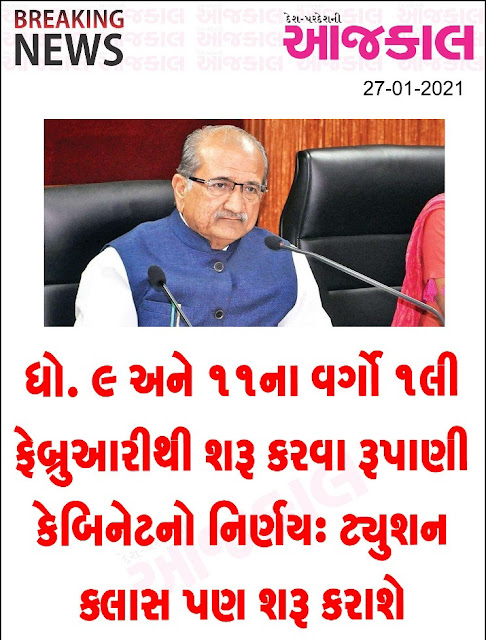 The decision to open a hostel will be taken after study

The process of admission of students of Std. 9 to 12 in the state has been extended till January 31

The lockdown was imposed in the year 2020 due to the Corona epidemic.  In which online education was started to stop children from studying by stopping offline education in schools and colleges.  Now in the new year, on January 11, standard 9 to 12 schools were started in the state.  Now after the completion of the cabinet level meeting chaired by the Chief Minister in Gandhinagar, the state’s Education Minister Bhupendrasinh Chudasama has announced that the standard 9 and 11 schools in the state will start from February 1.  It has also been allowed to start tuition classes as per Corona’s guidelines.  The guidelines announced by the education department on January 8 to start classes 9 and 11 will have to be followed.

According to the circular of the District Education Officer, considering the representations received by the Gujarat Board of Secondary and Higher Secondary Education, in the situation of Corona, students who have been denied admission in Std. 9 to 12 in the academic year 2020-21 can be admitted to the school till January 31.  The date for admission will not be extended as the deadline for admission of students who have been denied admission due to the situation of Kovid-19 has been extended four times and the admission process has already been completed by the schools.  Students are given this last chance to get admission in the school.

Schools were started on January 11 in the state

Standard 10 and 12 schools were started in the state on January 11, nine months after the Corona epidemic.  The students came to the school with joy and enthusiasm.  The joy of starting schools could be clearly seen on the faces of parents and teachers.  All the students entered the school following the SOP of the government.

Schools and parents have to take care of these things

Sanitation facility has to be provided in each campus before starting school-colleges.

Students should be provided with thermalgun checking, sanitizer and soap for hand washing.

Social distance should be maintained in the classrooms and in the school-college complex.  Not only that, the mask must be used.

It is also important to ensure that medical services are available within walking distance of the school-college.

The online education system provided by the schools and colleges in the state following the SOP of the Government of India will remain the same.

The SOP will be applicable to all government, grant-in-aid and self-finance schools, Kasturba Gandhi Balika Vidyalaya, social justice and empowerment department as well as Adi Jati Vikas department schools of all the boards in the state.

Student attendance at school is not mandatory.

Institutions must also obtain the written consent of the student’s parents or guardians to attend school.

Students will also be asked to bring their own masks, water bottles, books, snacks, etc. from home and not to interact with other students.

According to the revised seating arrangement in the classroom, there should be a distance of at least 6 feet between the two students.

The principal-principal will have to arrange for the students to come in stages so that there is no overcrowding in the school-college campus.

It is also suggested that students come to school on the scheduled days of the week and do homework assignments on the remaining days.

It is also advised not to play sports or any other group activity on the field of mass prayer.

Parents will be encouraged to use their personal transportation to get the child to and from school.

Students who use public transport will also be given appropriate precautionary guidance from the school.